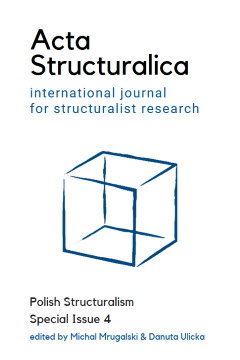 1Polish structuralism is one of the many submerged traditions of the European humanities. Admittedly, the knowledge of the contribution of Polish (whatever this means) scholars to the emergence of international structuralism is fairly widespread. People who ignore Jan Baudouin de Courtenay or Mikołaj Kruszewski’s impact have good reasons to extend their education, for example by getting acquainted with the present issue of Acta Structuralica, which, however, contains much more information: What happened after the great beginnings? How did Polish scholars respond to, or participate in the development of structuralism? What kind of caesura was World War Two? And if we stick to the early stages of the movement’s development – which actors working alongside great initiators were suppressed? Were those founders shifted beyond the attention spotlight of the discipline for the same reasons as their followers of postwar generations?

2The texts collected in this special issue of Acta Structuralica dispel the myth of the detachment of Polish literary theory, as a theory from the wrong side of the iron curtain, from the global circulation of ideas, models, and notions. On the contrary, the right and victorious side, the West, turns out to be insensible to a fascinating abundance of theories, clinging to the few household names of the formalists or Bakhtin or Lotman as a cover-up of its obliviousness. The Polish structuralists demonstrate a captiousness towards concepts trending in their time, about which it is hard to tell if it characterizes a man or woman of the world, or a provincial dressed up as such according to their imaginations. The Polish structuralist is, you see, what optics calls a ‘bistable figure’, therefore it’s up to you, gentle reader, to decide whether you see an ambitious resident of an at-all-time remote country, interesting for historians of the region, or a chance to rethink the central assumptions with which you comprehend literary texts.

3This issue of Acta Structuralica consists of two parts, a historical account of the development of Polish structuralism, and an anthology of narratological studies, written in the framework of, or in opposition to, structuralist tenets. Thanks to the anthology, a non-speaker of Polish is for the first time able to appreciate notions and models that have been shaping the methodological consciousness of Polish literary scholars and readers for many decades now. The imagination of Polish authors, who generally enjoy greater popularity than Polish literary scholars, likewise took shape under the influence of those concepts. We expand on the ideas in a special introduction preceding the anthology.

4The historical part, with which we open this issue, consists of three spotlights on fairly distributed special problems of Polish structuralism: verse studies in a comparative perspective (Klára Čermochová), poetical semantics in confrontation with Cyprian Kamil Norwid, the poet universally regarded as a hermeneutical or hermetical phenomenon opposing structuralism’s bisections (Christian Zehnder), and the figure of Edward Balcerzan, particularly his contribution to translation studies (Ewa Kraskowska and Ewa Rajewska). These three loci are framed by general overviews of the movement. Michał Mrugalski describes the history of international and interdisciplinary entanglements and contacts of Polish structuralism, while Edward Balcerzan demonstrates in a conversation with Ewa Rajewska the personal and intellectual event history of the movement from a perspective of its leading participant. And since the history of intellectual entanglements, when it is augmented by personal accounts, amounts to the history of Polish structuralism tout court, it is time to finish these preliminary remarks so that informational redundancy is kept to the minimum necessary for information to pass through to you.